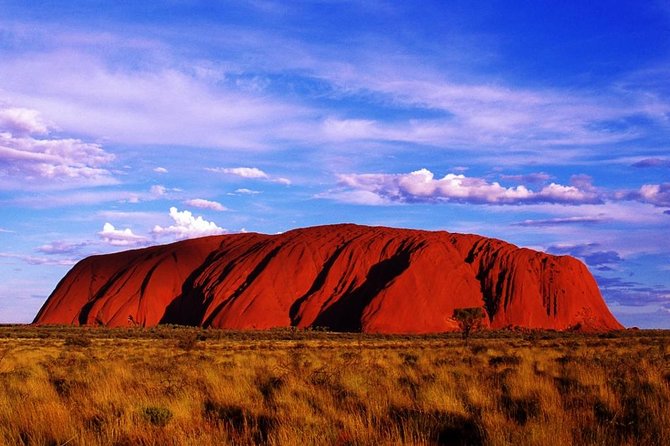 Experience the wonders of Kata Tjuta & Uluru as part of your Northern Territory adventure.

Travel in air-conditioned comfort, hear intriguing stories and learn the secrets of this unique world-renowned destination. We provide beverages, snacks, and BBQ so all you have to do is focus on your incredible surroundings.

Combining luxury with exploration and discovery, this day tour is one of the most popular things to do during an authentic outback discovery holiday.

This day trip to see the sights of Uluru and Kata Tjuta is a memorable experience for holidaymakers of all ages.

All activities are considered very safe for all age groups. They do not require a high level of fitness or agility.

Itinerary
This is a typical itinerary for this product

Your professional tour guide will show you the real outback they love and enjoy so much.

You will be collected from outside the Outback Pioneer Hotel, Desert Gardens or Sails in the Desert in Yulara (Ayers Rock Resort) between 11:40am-12pm. You will then drive to the World Heritage listed Uluru and Kata Tjuta National Park.

Travel to Kata-Tjuta (Olgas) for the first walk of the day into Walpa Gorge. Embrace the domes of Kata-Tjuta while taking in the views of the open plains on the return walk.

Head to the base of Uluru (Ayers Rock).

From here one of your two guides will take you on a guided Mala Walk. The Mala Walk follows the north-west side of Uluru, where there are many fine examples of Anangu rock art, and you can experience the wonder of the sheer vertical walls. The guide will tell dreamtime stories of the Anangu People.

Drive from the front of Uluru around to the Kuniya car park, which is at the back of Uluru.

From here start your second Uluru guided walk to the Mutitjulu Waterhole. The guide will take you along a short track to the Mutitjulu Waterhole – home of an ancestral water snake called Wanampi. The guide will share stories of local traditions and explain how the Anangu people traditionally used the waterhole for hunting. The caves containing rock art were used in the past by Anangu still alive today.

Finish your day with the breathtaking Uluru sunset and a glass of bubbly at a delicious Aussie BBQ. A spectacular day never to be forgotten.

Great way to hear about the area from the guide Ross. Enjoyed it all especially the Uluṟu waterhole.

Karen, our guide and driver for the Uluru and Kata Tjuta was excellent. She had a great knowledge of the Aboriginal stories and geological knowledge of the area. We had enough toilet stops etc. The Sunset while having the BBQ was a highlight! The food cooked and salads were delicious and the free champagne, beer, orange juice was generous!

Was great to have such great knowledge shared by our guide Karen. She shared her knowledge of not just the landmarks but the native vegetation and animals as well.

Very disorganised didn't get the walk as advertised due to the bus breaking down. Guide was pressed for time due to having to pick up other groups Not worth the money

The description is false, we were advised: 30+ seater bus, we had 21 sester minivan, air con, snacks, fruit & drinks provided. #1 air con barely working in first bus, minivan was very tired, old and dirty. Our Coach broke down so we waited at Cultural Centre for approx 2hrs, cut tour short 1 walk instead of 2, so missed out on watering holes. 2nd van had no air con, driver didn't have microphone so couldn't hear her explaining anything, nil snacks, 1 x apple provided and water, but you needed to bring your own water bottles (NOT specified). Our Guide Lauren, was professional and did a great job, but from what I could see, staff are given inferior Buses to work with, rushed with too many runs back and forward to Yulara (Lauren did 3 that I counted). Only 1 staff at Uluru Lookout trying to set up and serve drinks & bbq - which met people from Alice Springs tour, not enough seats and tables, Customers helped 3 staff pack away tables and chairs, everyone was happy to help but for the money, not a cheap tour, they needed more staff to assist.

Ross and all the staff were great. So much easier to book with Viator or Emu Run than Voyages, really lovely trip. I would highly recommend.

Water hole in Kata Tjuta & sunset in Uluru was very impressive . Our tour guide “Ross” was excellent, we loved his stories about the significant caves he took us.

Lauren was a great guide around Uluru, knowledgeable and informative, Ross our next driver was excellent. The walk in at Kata Tjuta was also interesting, time was a bit short so we didn’t quite make the end. The BBQ at the end while the was setting sunset was the perfect finish to the day.

While I enjoyed the day and our host Lauren was fantastic, I was disappointed at the time we spent at Uluru. I would have liked to have done more of the base walk. Unfortunately members of our group also got lost so we lost time waiting for them to come back. The cultural centre while nice and quaint doesn't need the hour allocated to spend at it. After the centre we then drove back into town (30-40mins) to collect more passengers then back to Kata Tjuta, I found this to be a waste of time. Which could have been spent at Uluru. The dinner was a basic bbq which was expected. The price is expensive but as for things to do and see we expected this as well.