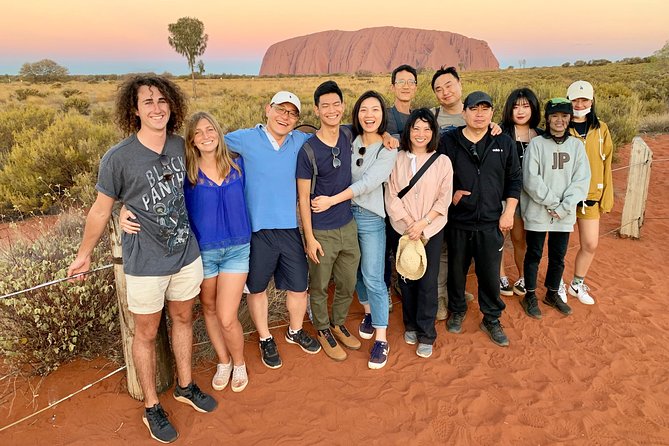 Explore the mystery of Uluru and watch a breathtaking sunset over the worlds most iconic rock. Camp underneath a billion stars and hike between the magnificent domes of Kata Tjuta. We are the smallest family business in the big Red Centre and the only company to offer a tailored 2 day camping tour in the Uluru/Kata Tjuta National Park. See everything the area has to offer and avoid the endless driving hours associated with trips that run from Alice Springs. Our groups are smaller, our tours are more personal and our legendary guides are always ready to welcome you with a story and a smile :)

Pass By: Uluru-Kata Tjuta National Park, Northern Territory Australia
Fly direct to the Ayers Rock Airport and roll straight into the National Park in a matter of matter of minutes! Don't make the mistake of taking a 6 hour bus journey from Alice Springs like the rest..

Pass By: Uluru-Kata Tjuta Cultural Centre, Lasseter Highway, Uluru-Kata Tjuta National Park, Northern Territory Australia
The Cultural Centre was opened in 1995 to mark the tenth anniversary of Uluru and Kata Tjuta being handed back to its traditional owners. The perfect introduction to the National Park it has displays showing the history of the area, its local people and artwork from all across the Red Centre of Australia.

Pass By: Uluru Rd, Uluru-Kata Tjuta National Park, Northern Territory 0872 Australia
Rising dramatically from the Central Australian desert the huge red rock of Uluru is one of Australia’s most iconic attractions. It is home to a huge network of aboriginal stories that have been passed through the generations to keep this country strong.

Pass By: Mutitjulu Waterhole, Kuniya Car Park, Uluru-Kata Tjuta National Park, Northern Territory 0872 Australia
A beautifully shady and quiet area where aboriginal families would gather to hunt kangaroos and teach the younger generations about indigenous law. Mutitjulu Waterhole is home to some of the finest caves and rock artwork that the Uluru-Kata Tjuta National Park has to offer.

Pass By: Uluru Rd, Uluru-Kata Tjuta National Park, Northern Territory 0872 Australia
Watch the incredible colours change and light up the surrounding desert at the world famous Uluru sunset! This part of the tour is what inspires many people to make the journey to the Red Centre in the first place and is a memory that once created will last a lifetime..

Pass By: Yulara, Yulara, Red Centre, Northern Territory
Head back to camp Rockstar for a healthy dinner and camping in classic swags underneath a blanket of a billion stars. Camp on the red earth of Outback of Australia while still retaining a few of those creature comforts with hot showers and toilet facilities.

Pass By: Yulara, Yulara, Red Centre, Northern Territory
Rise early from the comfort of your swag for tea/coffee and a light breakfast at camp Rockstar before setting off for the days adventures.

Pass By: Kata Tjuta - The Olgas, Kata Tjuta Rd, Uluru-Kata Tjuta National Park, Northern Territory 0872 Australia
Head straight back in to the National Park for a scenic drive through the sandy expanse of dunes that form the Red Centre. Witness the incredible changing shapes of Kata Tjuta rise in the distance as first light begins to fill the surrounding desert.

Pass By: Ayers Rock Airport, Yulara NT 0872, Australia
Tour draws to a close at the Ayers Rock Airport with everybody in the bus fully qualified as “Rockstars” and able to tell the world about their adventures and the magic that is the Uluru/Kata Tjuta National Park.

Meals included:
• Breakfast
No accommodation included on this day.

Thank you, thank you and a thousand times thank you for the quality of this tour :) This experience was a highlight of my time and travels in Australia and its all because of you Mark and the amazing tour you are providing. With my work for a tour operator I have met many tour guides and I have to say that you are my favourite. Such an amazing hard working person with incredible knowledge, experience and brilliant humour. Everything was just perfect and I will cherish all the memories forever. Keep up the good work and may God bless you and your business abundantly. Sending lots of love to you and Roxy, Aldijana

Thanks to Mark and Roxy, I had an amazing trip! Mark was thoughtful and amusing the whole time. His stories clearly showed his devotion to nature and people in Northen Territory. It was amazing.

Mark was an excellent host and guide! He shared extensive knowledge of the landscape and local culture and ensured a wonderful hiking and camping experience.

Mark is a very well organised, passionate and genuine tour guide. His knowledge, understanding and love for the traditional owners, their culture and history is evident and will make their stories come to life as you explore Uluru and Kata Tjuta. Mark has everything taken care of: transfers, national park fees, accommodation and meals, including a delicious evening meal. Sleeping under the stars in a swag was a highlight. A tour that you can truly sit back, relax and enjoy the beauty of the natural surroundings.